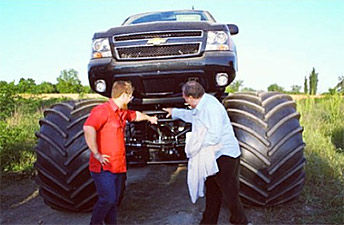 This all new project from the PEI team is a change of pace for the guys, but turned out to be an awesome product when finished. The task was converting two 2012 Chevrolet Suburbans into Monsters! Their final destination would take them all the way to Moscow, Russia. The project involved a lot of customization including two Patrick Chassis’ as the base of the build. When the PEI team finished up work on the two trucks they were loaded into containers and sent over to Russia. One of the trucks has seen recent media attention on the set of a movie called Turquoise in Russia, where the leader of Chechnya Ramzan Kadyrov took an up close and personal look at the PEI creation.